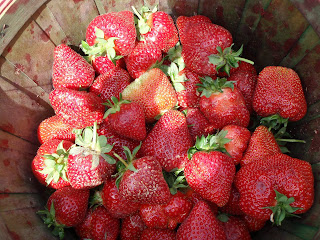 Fresh strawberries are like candy. That’s why I love strawberry picking season. I don’t mind getting the knees of my jeans stained pink if it means strawberries right off the vine.

So when Jean’s Berry Patch announced that they were open and having a great season, C and I headed out there.

The berries were amazing: huge and abundant. I could not believe how beautiful and prolific they were, so asked the worker about fifteen times if he was sure they were organically farmed. And yes, he is sure. All organic.

Which is good since C was enjoying smashing the strawberries and picking at the vines. He clearly thought strawberry picking meant squeezing strawberries until they popped, but besides his messy hands, I was okay with that. And so were all the staff there. This is a locally owned farm and all the workers are volunteer church friends of the owner, so they were very kind and accommodating. They love kids and encourage their participation.

And turns out this is a great activity for the kids. To be outside directly harvesting fruits to eat from a local farmer is educational, not to mention fun! The only concern I had at all was that the place we were set to pick was fairly close to a road. But the strawberry patches are quite large and I am sure if I had asked to pick somewhere else they would have let me, I just didn’t think of it at the time since we managed fine.

The prices are pretty good. Not grocery store prices, but these berries taste much better. It is $1.35 per pound for what you pick. (MiCHill note 2011: prices are up! It is now $1.50/lb for you pick.) If you want fresh strawberries, 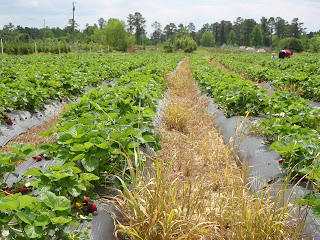 though, and simply don’t have the time to pick your own, they do have strawberries available pre-picked at $4 per quart, just drive up. It is a good thing the prices are fairly decent, too, since I picked way more than I needed. I will next be trolling the Internet for good strawberry recipes…

I will say that this activity probably won’t work for new babies or the really little ones. You do have to be bending over picking berries, so having a child in an Ergo or sling would most likely be difficult. And no strollers, of course.

By the way, there are a few pick-you-own strawberry patches in the area. I picked Jean’s as it is one of the oldest (25th anniversary). But since strawberry picking is such a fun activity, I would go with whatever farm works for you.

Jean’s opens for picking at 7 am and stays open until 7 pm or the vines have been picked over, whichever comes first. So you definitely want to call before you go to make sure that they have patches to be picked. Although this is such a good year for strawberries that they will most likely have berries waiting for you.

← Chick-fil-A: It’s for the kids
The Children’s Store →