Despite being the season of parks & playgrounds, sometimes there is a not-so-nice day. As that was 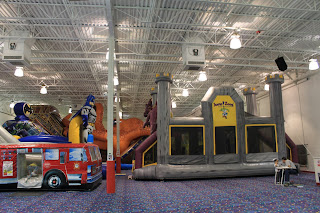 yesterday, Sarah C. and I decided to take the boys (who sound like an alphabet song together — “C & D”) out to JumpZone in Cary.

JumpZone is a big play space in a strip mall next to the Harris Teeter on the corner of High House and 55. There are the most ginormous (not sure that’s a word but it bests describes these things) inflatable moonbounces. Amazing. There are about 7 of them, too: a dinosaur obstacle course, a Disney Princess castle, a Scooby Doo bus, a Batman, a pirate ship being eaten by an octopus, a “regular old moonbounce,” and a fire truck that is a very large inflatable slide. Who knows what else I am missing….Oh, there were also free air hockey tables available.

The facilities include 4 nice party rooms, too, if you decide to rent out a space and have a party there. Each room has a hand painted mural, is themed (princesses, dinosaurs, marine life, and jungle life), and they are very clean. JumpZone parties are complete with food, so give them a call if you think that would work for you. 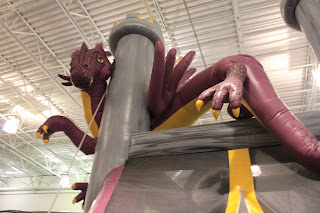 ay First, Eat Last” which I love). A la PlayNation, they just started offering free WiFi, too. So you can bring your laptop and surf the Web while the kids play.

I have really mixed feelings about this place. It is a fantastic idea, and the owner was so nice! The facilities are very clean, and very safe. Not only is everything in the main play area inflated and squishy, but there are staff members who are in the bounces to regulate and monitor all the children and ensure play is safe and as in-control as they can be whilst bouncing around crazily.

But this is definitely a place for older kids. Sarah C. and I guess that the 4year mark seems to be the perfect age to bring the kiddos in. The moonbounces were, of course, a little too large for toddlers who can’t quite control their motor skills. I had fun since I am a little crazy and dragged C into a few bounces with me. He had a blast mostly just watching the other kids and bouncing around while I held him. But man, that was some serious work for mommy! Not to mention that the steps going up on the fire truck slide were not made for post-childbearing hips but more like 8-year old hips. 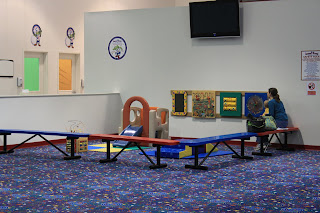 They do have a 2&under area, but this is really not great, to be blunt. There is a Kangaroo climber, some stuff on the walls (which is hung too high for the babies to see), and a really nice activity cube. But it isn’t padded. Nor is it walled off. They tried by putting benches around it but, really, what baby or toddler can’t crawl under a bench, and even enjoy that process. So we had a serious case of the Runaway Babies. The place is so big, though, that it didn’t seem to matter too much. Just harder for the parent to constantly be chasing the child down.

I am really confused on pricing, I have to admit. Kids under 2 are free. But I believe you have to pay at least 1 full admission ($8) to get in. Sarah C. and I somehow managed to get in completely free….perhaps they know somehow that we blog….??? No, seriously, no idea how that happened. Like I said, the owner was really nice.

Open Play hours are limited so you have to check out their online calendar before you go. If there are birthday parties, for example, they can close up.

Overall, I would say take the older kids and think about a birthday party there. It is a great spot, but C and D were just a little too tiny.