** Updated 3/9/16: The All Children’s Playground at Laurel Hills Park officially closed in September 2015, but the new playground is scheduled to open in early summer 2016! **
A post from Sarah C. today. A September 2010 closing date seems very close, and I definitely want to take C there before this classic park is no longer an option!
Tucked inside of Laurel Hills Park in Raleigh is All Children’s Playground. Similar to Kids Together Playgroundin Cary, it was designed to accommodate children of multiple ages and abilities. We took a family outing there to explore and play. My husband and I interpreted the “all” part of the name to mean big kids like ourselves could play too and all 3 of us had a great time. 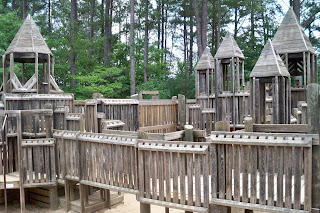 The playground features your traditional elements such as swings and sand. There is also a small basketball court with a low goal just for kids. While we were there a group of 4 boys around 4-5 years old were having a great time using it. But the real gem of the playground is the “castle.” I’m not sure that’s the official name, but that’s what it looks like to me. It’s a large wooden play structure with a maze of spaces to climb, slides, tunnels, etc. As we explored, we came across some neat paintings hidden throughout and I am curious about the story behind them. 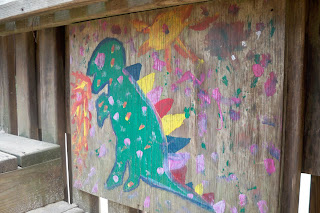 In researching this playground further, I am both a bit saddened and a bit excited to learn that there is a group, Sassafras All Children’s Playground, working to rebuild the playground as it does not meet newer codes. Personally, finding the “castle” was like rediscovering a bit of my own childhood. This is the type of fun play structure I remember exploring many years ago. I hate the thought of it being torn down, but at the same time recognize that safety is more important. The idea behind Sassafras is to build a ne 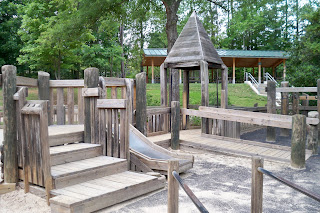 w, safe playground that will continue the tradition set forth by the original to be a place for children of all abilities. Who isn’t excited about that?