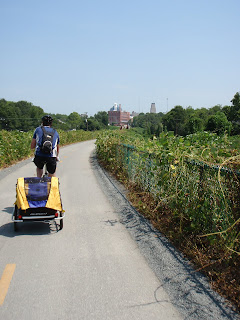 The American Tobacco Trail is a classic Triangle to-do. It is one of the things people love about living in Durham. I had been on the Tobacco Trail before, but never with a child. Here are my thoughts on enjoying this as a family…

DH and I were getting summer cabin fever and decided to beat the heat by doing an early morning bike ride with C on the Tobacco Trail. The Tobacco Trail is actually the main trail that heads south from downtown Durham. Yet the term is used to apply to the system of greenways and trails throughout Durham, Wake, and now Chatham Counties. A rails-to-trails project, there are over 22 miles of trail total.

Even though there are parts of the trail closer to where we live (see maps below for full system), we really liked the idea of being in an urban area, specifically near the American Tobacco Campus. We made a full morning out of this. We parked at Durham Bulls Athletic Park (more on that in a moment), and first thing in the morning we went south on the trail. We biked out a few miles, turned and came back. By that point the day was starting to heat up, so we went into Tyler’s to have a beer and some lunch, then went home as the 100 degrees started to come at us. We enjoyed that this biking trail in the downtown area gave us a place to eat, and get inside to some A/C for a little while!

There are places to park for the trail around town. The links below provide information about parking. Note that if there is an event at the Durham Bulls Athletic Park, parking is much more limited. There is always the pay garage next to the park, though. And even though the trail does come down to Southpoint mall area, you can not access it from the mall. The trail doesn’t cross 40.

The trail is in various states of completion. This means that some portions are going to be paved, some gravel, some not yet completed at all, or in various mixed states. The other reason why DH and I chose this particular part of the trail was because we had confirmation that it was completed. This meant it was predominantly paved. There were some sections covered with a loose pebble gravel, but no problems navigating this with a bike or a stroller.

This path is very stroller friendly and bike friendly. It is relatively flat so an easy trail to enjoy. There are mile markers.

With any urban trail, there are some significant road crossings. Some of these have stoplights for traffic, some do not. There were 1 or 2 major roads that made me a little nervous with a child. However, the traffic was incredibly good about stopping and waving us through. 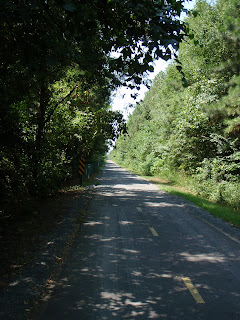 The trail is open from 5 am – 10 pm. Yet there are some parts of this Trail I would not feel comfortable being on during early morning or late night hours. This trail is in Durham. Even though Durham has undergone a lot of restoration over the years, like any city there are still areas of low income housing with dark alleys.

But the trail is also well-used. So there were a lot of people out there while we were there, too, so I doubt you will ever really be alone. There is safety in numbers!

I will also point out that the trail isn’t terribly scenic here. This is a great rails-to-trails conversion, and it is a wonderful thing for a city to have and offer. But you don’t get fantastic views. In fact, when we did finally get a nice view of downtown I was so interested in it I ended up losing focus and wiping out on the bike. Oops! As I look at my skinned palms, I am reminded that the trail can also give you a beating! Wear your helmet if biking folks.

In summary, the trail is a great path for families since the difficulty level is a resounding Easy, and there are places of interest around the Trail to stop. And given the trail’s length, the odds are that there is a trailhead close to you.