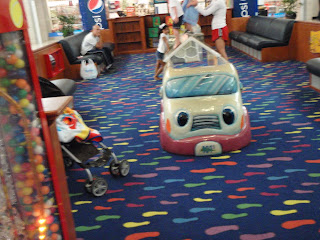 Since we’ve reviewed and mentioned the play areas at many of our local malls (such as Southpoint, Triangle Town Center, and Cary Towne Center) we would be remiss in not reviewing the play area of the the largest Triangle mall: Crabtree Valley Mall.

For the largest mall, the play area is small. It is nicely carpeted, with good benches around. It is mostly walled, with an open entry door that can not be closed shut (pretty standard for mall play areas). Again, though, this is not a very big space. Southpoint Mall’s Kidzone is larger.

Outside of the Crabtree Mall play area, there are some candy vending machines and pay-to-play rides. A l 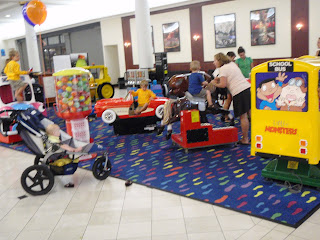 ot of pay-to-play rides, as a matter of fact. And many of these rides were themed with favorite cartoon characters (although apparently I have a lot to learn since I didn’t recognize all of them). These rides take up a lot of space, and there were just as many kids running around and climbing on these rides as there were in the padded play space. C was intrigued by all the lights and sounds.

We were there on a weekday afternoon, and it was getting a little cramped. I would guess that you have to beware of weekends.

Honestly, C and I had just as much fu 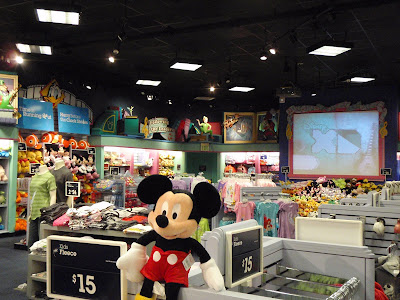 n at the Disney store watching the huge tv there and at the LEGO store building things. But I appreciate that this play area is available and that the mall offers it.

By the way, there is also a Build-A-Bear workshop at Crabtree Valley Mall. And don’t forget about Magic Kids Care (closed) if you want to shop solo for a few hours.