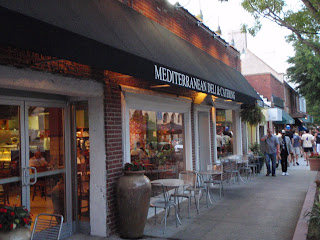 I have been in Mediterranean Deli (to those in the know, it’s “Med Deli”) a lot lately. So it needs to be shared with you all. You know, just in case you need to know where I am at lunch time on any given day.

Med Deli is a walk up counter spot on Franklin Street in downtown Chapel Hill. You can get platters, gyros, schwarmas, and more. My favorite thing to do, though, is head in, look in the counter filled to teeming with the day’s fare, and pick what looks good.

This is great for kids. You can get stuff by the platter, as I said, half pound, full pound, and all sorts of options. So if you have a child who is a picky eater or a small eater or a big eater, this place will suit. There are desserts and newly added just this year Med Deli bakes all their pita in house.

And it is healthy food, too! (Well, except those baklava.) 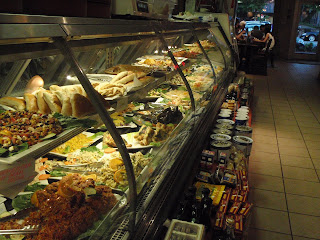 High chairs are in the house, but you have to walk into the hallway where the bathrooms are. Plenty of them, though.

Another great tip: Med Deli also does carry out. I LOVE to take Med Deli fare to new parents and those who just brought home a new precious bundle. For when they are too tired to cook but need healthy and sustaining food…Med Deli is a great fit and always a hit.

Parking can be tough but it is summer now, which means no more UNC traffic to contend with, and there is a pay lot across the street near the McDonald’s.

In this heat, think Greek!