Now that your Thanksgiving and Black Friday holidays are over, it’s time to turn to Christmas!  Everyone has been excited about the new train-based exhibit for the season over at Durham’s Museum of Life + Science, and Katie gives us the full scoop on this recurring event: 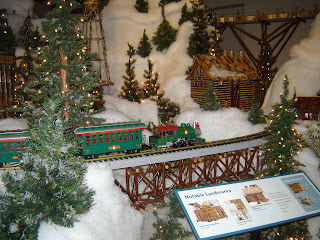 H is very into trains.  He is into trains that if given the choice between visiting a bounce house and sitting in a car watching trains, he’d choose the latter.  So, last week, we visited the inaugural Wonderland Express exhibit at the North Carolina Museum of Life and Science.  We had an even better time than I expected.

The exhibit is located in a space adjacent to what used to be the sound and music room (which is currently a snack bar, and while it is fabulous we sure hope that sound and music room comes back).  You walk past lit Christmas trees into what I have to say is appropriately named Wonderland Express.  It really is a train-loving child’s wonderland! 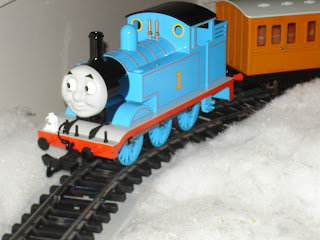 The exhibit fills the room, and while it isn’t the largest train exhibit I’ve seen in terms of square footage, it is absolutely the most elaborate, and worth the trip.   H was in love the minute we walked in, pointing and saying “train, Mommy, train!”  It didn’t take long for him to start running from one spot to another to check out some of the North Carolina landmarks (which H was too young to understand, of course).  That’s right, it isn’t just a train exhibit—Wonderland Express is representative of North Carolina from the mountains to the Cape Hatteras Lighthouse.  So, while H was thoroughly entertained for far longer than I expected,  I had a great time picking out all of the landmarks. (Along those lines, I’m thinking about going back with my eight year old niece as it is a fun educational opportunity.)  The best part for H, hands down, though, was finding Thomas, not far below his eye level, in the very back corner—with a button he could push to make Thomas go!  See, I told you, Wonderland! 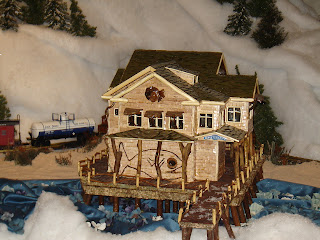 Now, let’s talk about the price.  I know that lots of folks are disappointed that the exhibit costs extra.  I have to admit that I was pretty bummed about it, too.  It costs $4 per person above and beyond the museum entrance fee.  I went all prepared to pay $8 ($4 each) to get into the exhibit (we’re members, so we don’t have to pay the museum entrance fee).  I honestly thought the cashier was wrong when she told me I only owed $2.  Here’s the scoop—if you are a member, the cost is $2 per person.  And, no matter what, the museum entrance rule of free admission for children 3 & under applies to the Wonderland Express exhibit as well!

To top off our day, we made a stop at Daisycakes for a sweet treat.   My husband stated it best when he called our day “Two year old Shangri-La!”