A park review from Katie during this gorgeous week:

I was so excited last Friday when our playgroup decided to give a new (to H and me) park a try!  I have to admit, I knew nothing about Baldwin Park.  In fact, I am somewhat ashamed to note that in my ten years in Chapel Hill (albeit, spread over several short “spurts”), I had not even driven down Broad Street.   Even though this park is considered a Carrboro City Park, it is a smaller park that seems to primarily serve the surrounding neighborhood as opposed to being a large park (like Wilson or Anderson parks). 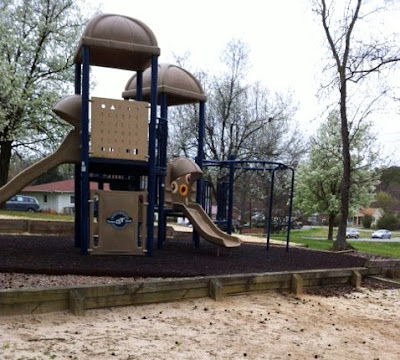 So first, the great parts:  The equipment is pretty new, in great condition, and, well, fabulous.  Honestly, I want to play on it!  While there is only one playset, it is pretty large and it has activities for toddlers and older children.  The ground cover in this area looks like mulch at first glance but it has a nice rubberized material.  In addition to this area, there are swings (2 bucket and 2 regular) and a sand area with the cool diggers like they have at Wilson Park.  There is plenty of shade to be had (hurray for large, old trees!).  H had a wonderful time (read as, I had to drag him kicking and screaming away). 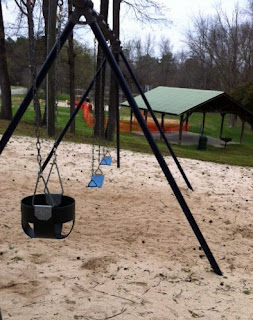 Now, the details H doesn’t care about but I do:  There aren’t any bathrooms.  There is a picnic shelter set away from the park, but no tables.  Parking is on the street, and only on one side.   There is little buffer between the play area and the street, with no fencing.  All of these are things I can work with, but things that as a Mom I like to know what I am in for.

My biggest concerns were that in that incredible sand area there were broken glass shards (which looked to be from glass bottles) which I discovered when H was digging them up.  And over close to the slide, there were discarded cigarette butts.   Certainly, this could happen at any park but I wouldn’t be painting an accurate picture if I didn’t tell you.   So, I did a quick internet search and I found some comments that the park is underutilized but I can certainly vouch for the fact that work is going on there to build community participation and involvement.  In fact, there is an awesome new community garden, and NC State recently completed a Stream Restoration Project there.  Hopefully, as work continues and the park gets more family/community use, the broken glass and discarded cigarettes will become a thing of the past.

The park is in the Lloyd/Broad Street neighborhood of Carrboro, and also serves the Northside Community of Chapel Hill as it sits right on the Chapel Hill/Carrboro border.  If you need a point of reference, it is roughly behind Milltown, just off of Main Street in Carrboro.